Dangers of Making Excuses as a Leader 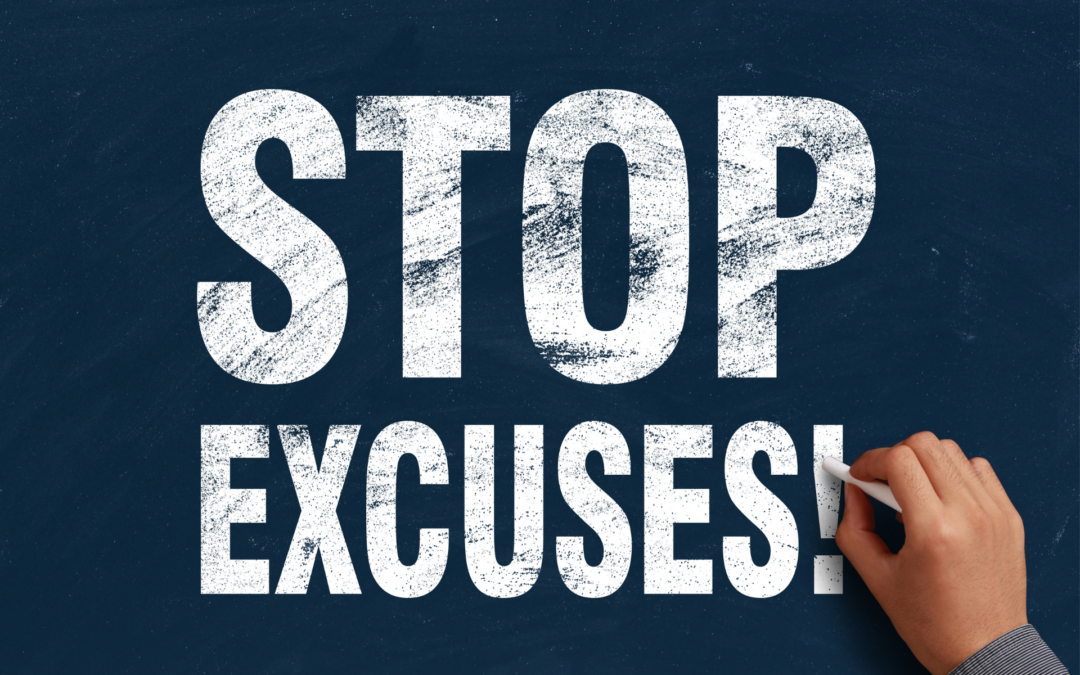 There are a lot of different excuses that leaders make when things go wrong or they don’t perform up to the standard that’s expected. You may feel that you’re not making an excuse but simply stating what happened. But, in the end, it truly doesn’t matter. It’s still an excuse and it does nothing to help you improve the situation and be a better leader.

Here are five of common excuses that leaders make.

1. I didn’t have enough time

Tight deadlines can be a real struggle. But they’re reality as well. As the leader, you usually have some control over deadlines and timeframes within your department or organization. But that’s not always the case. As a leader, it’s your job to figure out how to make it work. That might mean needing to prioritize your tasks and help your team with time management skills. Using the excuse that you didn’t have enough time isn’t going to fly as a leader.

Take responsibility for figuring out what needs to be done to make it happen within the time frame that you’re given. If you make excuses about not having enough time, you’re going to see your team doing the same thing.

Being part of a team means that sometimes you need to step up and do things that aren’t really your job. As the leader of the team, it’s your job to step into any role when needed to work along with your team to get the job done. If you’re constantly taking on tasks that shouldn’t be part of your job, then it shows that there is a bigger problem going on. It’s your job to get to the root cause of the problem instead of making excuses.

3. My team messed up

This excuse shouldn’t slip from your lips or even be a thought in your head. As the leader, the buck stops with you. If your team made a mistake somewhere along the way, as the leader, it’s your job to figure out where the problem is and what needs to happen in order to fix it. If your team messed up, it shows an area that you can work on improving as the leader.

4. I don’t have the right people on my team

This can be a tricky situation because not all leaders have full control over hiring or firing the people on their team. But as a good leader, it’s your job to get to know your team and then place them in the roles that they can succeed in. If you’re constantly feeling like you have the wrong people, it could just be that you have the right people in the wrong places.

If you truly feel that you have people on your team that shouldn’t be there and you don’t have control over the hiring process, talk to those that do about the situation that you’re faced with. Explore the options for changing the hiring process in order to avoid this type of situation.

This is a relatively easy problem to solve. While there are some natural-born leaders, anyone can learn how to be a successful leader. You may find yourself in a leadership position even though it was never your goal. This can feel a little scary. But as long as you’re going to make the excuse that you don’t know how to lead, you’ll never take the steps to learn how to lead. Instead of making excuses, get a coach that can help you with leadership development.

Why it’s dangerous to make excuses as a leader

Leaders are people who rise to the occasion. They don’t make excuses. Here are a few things that can happen when you make excuses:

You may think that the excuses you’re making are helping you, but they’re not. They are hurting you, your integrity, and your future success.

What you need to do instead of making excuses

It’s really simple. The best thing you can do is immediately take responsibility for the wrong. Apologize and own it (even if the error was caused by your team). Then, get to work seeing what you can do to fix the situation. Is there any immediate action that needs to be taken? Are there changes that need to be made so this isn’t repeated in the future?

Those are the things you should be thinking about.

Instead of making excuses, learn from the situation. It’s easy to get so caught up in feeling like we failed at something or made a mistake that we get stuck in that instead of learning how to move forward in a better way. Don’t allow yourself to get stuck there.

If you’re struggling with taking responsibility on your own, you may need to get yourself some accountability. This could be through a mentor, supervisor, or business coach. It may take some work and it may be uncomfortable at first, but it means you’re on the right path to being a great leader.