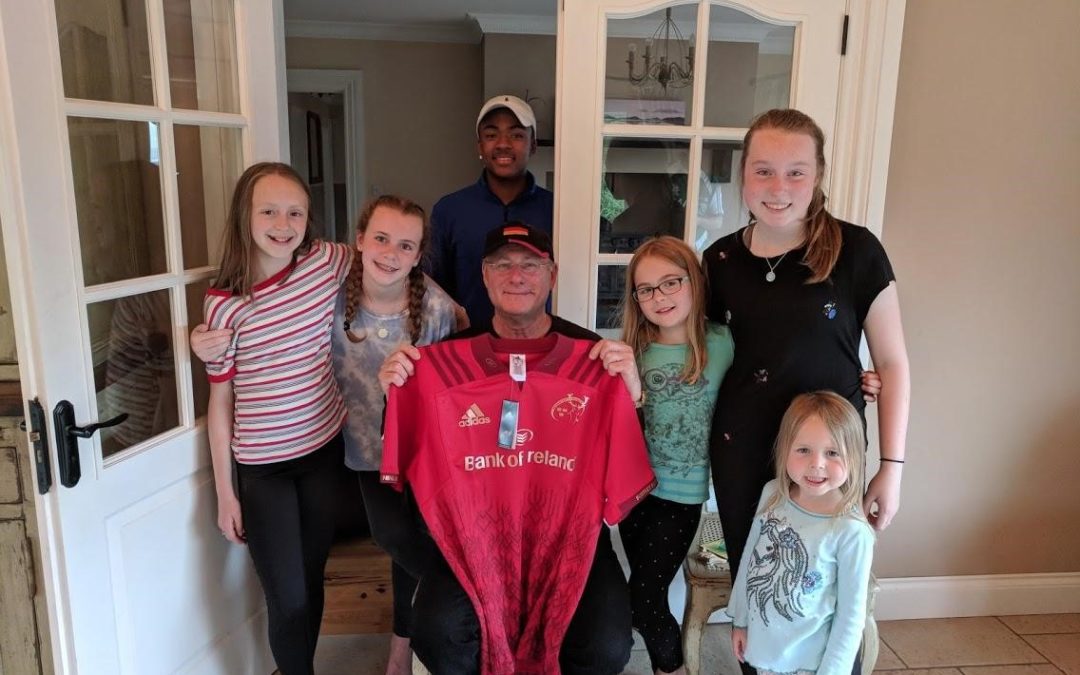 I don’t know if you’re a fan of surprises, but for the most part, I’m not. Well, I guess I did like my surprise birthday party when I was 38 (who expects a surprise party on that number?). And, this past Father’s Day I got a killer Munster county Ireland jersey, totally unexpected after telling my wife that we should get the same jersey for my father-in-law (pictured above) on the same trip. I wore this jersey to the Wisconsin State Fair and got a compliment from a 25-year-old kid working there. Yes, this old man got a connection to a young man because of a jersey. However, there are some surprises that I really don’t enjoy, like a surprisingly high tax bill.

Purely due to our success as a couple, my accountant sent us a revised tax bill. It was 2.5 times what I thought we would owe. As expected, this was a surprise that did not feel good. You know that feeling when you’ve eaten way too many hot buffalo wings to impress your brother/brother-in-law/brother-from-another-mother, only to regret it later that night or the next morning? Yes, that feeling!

What’s crazy is the many many thoughts that swirl around your head like: “What did I do wrong?” or “Is this right?” and “Can we take some ‘gray area’ cuts to lower this bill?” and lastly, “Would anything make this more comfortable because this is definitely uncomfortable?” After these initial thoughts raced through my mind, I recalled a lesson I learned from my recent past.

A lesson from the past

When I first met my wife, Michele in 2011, I was president of the Maple Dale Indian Hill Education Foundation and she was a single parent attending our friendraiser benefit skate party. (Yes, we met at the skating rink.) From our first date at the Brewer’s game, I knew I was going to marry Michele. For future reference, don’t tell your future sister-in-law (Jen) that you’re going to marry her sister within three months of meeting her. She will call you crazy (justifiably), then have to eat her words when you’re walking her down the aisle three short years later. I guess maybe you should do that if it works out, but I digress.

Why did I know I was going to marry Michele? I showed up to pick her up for our first date wearing a retro blue Brewer t-shirt, khaki shorts, and brown sandals. Michele was wearing a retro blue Brewers t-shirt, khaki skirt, and brown sandals. I mean, this was totally meant to be. However, one thing prevented me from asking Michele to marry me from day one. I had a humongous tax bill that I truly could not afford to pay and didn’t want to bring my past burden to a new marriage. That helplessness was debilitating on many levels.

After years of prayer, lost sleep, and repeated rejections from the state asking for debt forgiveness, I eventually prayed to God for the money to pay the bill instead of amnesty. Purely by grace, my cash flow improved to the point where I was able to pay it off in 16 months and could’ve done so in fewer than 12 months.

One big difference this time is our ability to actually pay the bill in full. However, the feeling of the tax bill is the same as it was when I didn’t have the money to pay it off. I don’t know if it’s just me, but my feelings sometimes don’t give an accurate indicator of what’s really happening. Yes, this is a very uncomfortable surprise, but one that can be addressed based on past success.

What does this mean from a leadership perspective?

One principle I learned over time is that we cannot control how we feel, we can only control our reaction to the feelings. As a matter of fact, it’s actually very human to feel a little nervous, dejected, upset, sad, or any other emotion that is a part of our natural experience after a surprise (this is why there are so many YouTube videos dedicated to this genre). However, what we choose to do in the face of that emotion is the true sign of our character.

As painful as it was to write the check, it’s on its way to the government. We’re not going to cut corners or try to delay the inevitable. Feelings cannot dictate what we do if we’re going to be strategic. I don’t believe in the adage to “take the emotion out of it”, because that leads to errors too. But, truthfully, I’m grateful for the opportunity to write this check as there was a time I would be getting a refund from not earning enough.

To avoid this from happening again, I’m meeting with my accountant to put together a plan to avoid this from recurring. It doesn’t mean it won’t happen again, but we’ll be better prepared to prevent it in the future and address it should it happen. Again, outcomes are not in our control. If something works, keep doing it. If it doesn’t, do something differently. This is the ethos of SPEARity.

That said, what uncomfortable surprise do you need to address? It will be hard, but the results will definitely be worth it.

Are you interested in staying in the loop with the latest news, tips, and events from SPEARity? Sign up for the Monday Morning Strategist to have it delivered right to your inbox once a week.