Being Intentional with Your Goal for 2021 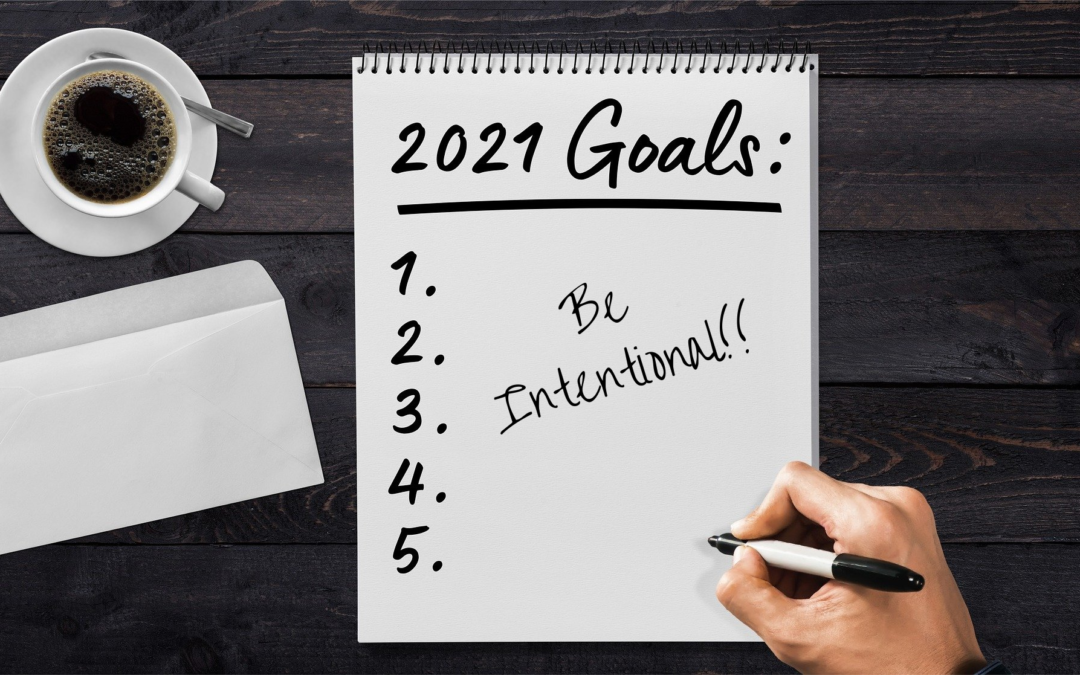 I think this is an interesting time of year. We all love to connect the new year with a fresh start and a chance to do better. We want to leave our old bad habits in the past and turn a new leaf. That sounds great, right?

But give it a few weeks and things start to return to “normal”. Wait a few months and most people and businesses are right back to where they were when the previous year ended. Why is that?

It’s because wishing and goal setting will only get you so far. We can set all the resolutions and goals in the world, but a lack of a plan and action makes it difficult to follow-through. And it’s not that we plan to fail, it’s that we don’t plan to succeed.

Making the jump for “intentions” to “intentional”

I think it’s safe to say that most of us have “the best of intentions”. Oxford Language defines “intentions” as “an aim or plan”. We all aim to do good things. We aim to grow the business this year, build healthy relationships, stay fit, and all the other good things that we want in life. Some of us go as far as making a plan, while others of us simply wish for those things.

But having good intentions and even a good plan will only get you so far if you don’t act on that plan. For example, I can be great at inputting my goals and tasks into the SPEARity app, but if I don’t follow through on using the app, doing my tasks, tracking, and adjusting, I’m just full of good intentions.

This is where “intentional” comes into play. When you do something “intentionally”, you’re doing it on purpose. It’s not only thought out and planned, it’s executed.

Intentions vs intentional is the difference between aiming to do something and doing it. (Kind of makes me think of Yoda saying “Do or do not. There is no try.”)

If only being intentional about things was as easy as it sounds. If you’ve struggled in the past with sticking to your goals, the ideas below can help you be more intentional at achieving success:

Making positive change takes time. If your schedule is overbooked, or you have no idea how long tasks actually take, it’s going to have a negative impact on your success.

Look at your calendar and make sure that you’re carving time out for the things that you want to achieve. SPEARity CEO, Darren Fisher is training to compete in an Ironman. Because he wants to succeed at it, he’s created a plan and he’s scheduled training time into his calendar. He has carved out the time that he needs to take the steps so he can succeed.

Once you have this time on your calendar, protect it. If Darren sets time to train on his calendar and then constantly misses it to do something else, it doesn’t matter that it was on his calendar in the first place. It only matters if he follows through on it.

If you want to succeed at your resolutions, you need a plan. Intentional action is only going to help you reach your goals if it’s going in the right direction. If you don’t take the time to create a plan, you may be intentionally spending time on it but you may be working on the wrong things.

Back to the Ironman example, Darren has a plan in place that tells him what to focus on each day that he trains. Without a plan, he could end up overtraining on some aspects of the competition while overlooking others. Having a plan matters.

If you struggle to follow through when you’re holding yourself accountable, you’re not alone. One study found that 92% of people don’t achieve their resolutions. Of the 8% that do, one of the things they have in common is that they surround themselves with support through coaches, mentors, or instructors.

If hiring a coach is the difference that helps you succeed when the vast majority of others don’t, doesn’t it make sense to give it a try? If you’re interested in exploring how SPEARity coaching can help you overcome your obstacles to success in 2021, contact us today. Don’t let this year be the same as all the others. Move past your “good intentions” to choosing “intentional growth and development”.