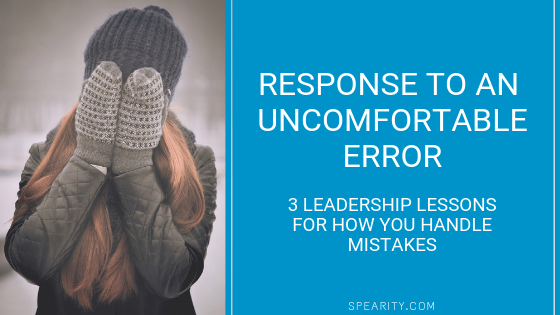 If you haven’t already read Darren Fisher’s blog post called Uncomfortable Error, click here and give it a quick read before reading my response below. It will make a lot more sense.

“Oh no.” That was my first thought when I read the draft of Darren’s blog post last week. I mean, we all make mistakes, but did I really want it to be broadcast to the online world? Did we really need to go that route? The answer—yes. There are too many important lessons that leaders could learn from my mistake and how Darren handled it as a leader.

Did that make it any easier to hit “publish”? Not really, but it gave me the courage to do it anyway.

So, last week you got to learn from Darren and his side of the “uncomfortable error” that I made. This week, you get to hear from me. I did a LOT of thinking about this error last week and how it was handled. I was amazed, even though I shouldn’t have been from my previous experience with Darren and SPEARity.

After all this thinking, there were a few leadership lessons that that stood out to me on how your response as a leader impacts your employees.

1. A leader’s response to mistakes builds or destroys the loyalty of their employees

Most of us in the younger generations don’t count on working with one company forever. Why? It’s not because we don’t like the idea of it. It’s because the loyalty from employers is gone. The business world is vastly competitive and you probably feel like if you want to continue growing, there’s no room for mistakes. So, if you’re having a problem with an employee it’s easier to let them go and find someone else to work for you. There’s always someone who knows more, will work for less, or has some other thing you think would be an advantage for your company.

After realizing that I made a mistake that was potentially going to cost Darren hundreds of dollars and plenty of time, I would have liked to have crawled in a hole. I’ve had several jobs in the past where a mistake like this would have involved a lengthy and unpleasant conversation that would have left me feeling like my job could be on the line.

But, Darren’s response was calm. Obviously, it wasn’t the news he wanted to hear, but it wasn’t the end of the world. He took a team approach to recovering from it, even though it was my error and more of the weight of it was going to have to fall on him (I wasn’t the one that was going to be driving 15 hours round trip to speak at the event).

And, you know what? His response made me feel even more loyal to SPEARity. It made me want to look for new ways to help the company instead of feeling like the next mistake would be the last mistake.

2. A leader’s response to mistakes impacts the type of work they get from their employees

Think about how you typically respond when an employee makes a mistake. That response plays a big role in the type of work that you get from your employee going forward.

Do you let the full weight of the problem fall on your employee? Do you make sure to get your point across that this is their mistake and they need to fix it. Let me assure you, the majority of the time, your employee already knows it’s their fault. Your beating them over the head with it isn’t going to improve the situation.

When you operate your business like this, your employees always feel like they’re one mistake away from unemployment. Not only is this dangerous for the mental health of your employees, but it means you aren’t really getting the best work out of your employees either. If they are so worried about making an error, they’re going to be too scared to try new things that could help your business grow.

3. A leader’s response to mistakes can build or destroy the confidence of their employees

If you are already using the SPEAR process then this will make sense to you. If you haven’t tried it yet, I highly recommend talking with a SPEARity coach.

When I started working with Darren my confidence was pretty low. I focused on my failures and ignored my successes. I was a Fearful Doer™ (if you don’t know what this is I recommend reading The Confidence Quadrant). And, I knew I was a hard worker, but some of that came from the fear of “not being enough”. Can anyone relate?

Well, a big part of the SPEAR process is learning to acknowledge both your successes and failures. This process has brought me a long way because I’ve been really good at focussing on my failures and even better at ignoring my successes. I’ve stopped seeing each failure as the end of the world and started to build confidence by recognizing and celebrating my successes.

When I realized that I somehow had failed to put this speaking engagement on Darren’s calendar I knew it was something that had to be addressed, but also that it wasn’t the end of the world. My interactions with Darren previously had shown me this isn’t how SPEARity works as a company and that’s not how he works as a leader. And, my steady increase in confidence assured me that this situational failure didn’t mean I was a failure (I think you’d be surprised at how many of your employees feel this way).

Putting it into practice

I encourage you to spend a few minutes today thinking about how you respond to the mistakes that you make and those that your employees make. Is there room for improvement? Are there ways you could be a better leader through these mistakes?

Are you ready to learn how to build your leadership skills and grow your confidence as a leader? Let’s talk! We are SPEARity, a local Milwaukee leadership coaching firm that specializes in business coaching, executive coaching, and leadership development training.