The Importance of Taking Action for Your Business 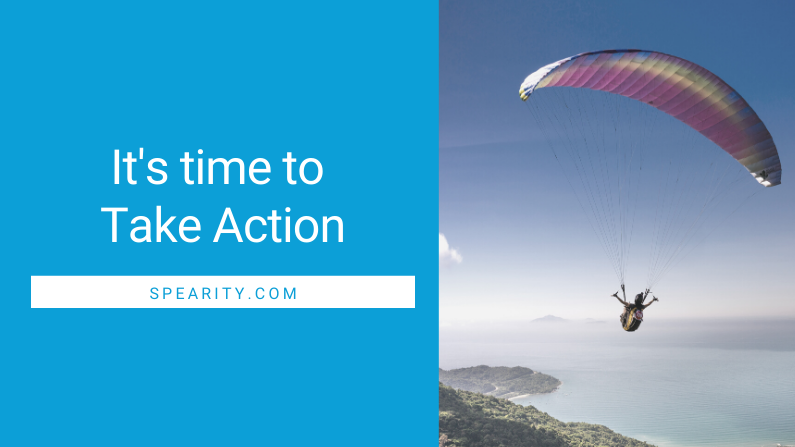 Last weekend I was watching an old episode of Man vs Wild. If you’ve never seen the show before, Bear Grylls, a British former SAS serviceman and survival instructor purposely strands himself in the wild to show you how to survive if you were to ever find yourself in a similar situation. Well, during this episode Bear was showing what to do if your parachute doesn’t open when you jump out of a plan. He actually jumped out of a plane during the show and cut away his parachute.

Now, that might sound crazy enough, but it doesn’t stop there. See, the reason that Bear was trying to teach people what to do is because years ago he jumped out of a plane and his parachute failed him. He ended up crashing, breaking his back, and nearly dying. He wanted to do it again to show people what he should have done.

Here’s where the business advice comes in. During the show, Bear shared that the mistake he made was that he hesitated. Instead of cutting his main parachute off when it failed in order to open the reserve parachute, he failed to act. That few seconds of hesitation was all that it took for him to crash instead of land safely on the ground.

Many business owners have been going through a similar situation the past few months. You had strong plans for the year. You knew exactly what steps you were going to take in order to reach your goals. Things were going along good. And, then your parachute didn’t open. The COVID-19 pandemic began.

Some businesses cut the cord on their original plans back in March. They realized that if they kept going on the original plan for the year that their business was going to crash. They had to pivot and create a new plan in order to survive.

But there are also business owners that are doing what Bear Grylls did when he crashed. They’re hesitating. They want to see what is going to happen as the economy continues to change. They are afraid to cut the cord because then they have to commit to doing something new.

At this point, some businesses have waited too long. We’re seeing reports in the news of businesses being forced to call it quits.

If you’re still sitting back and waiting to see what happens, it’s time to take action.

Look for ways to pivot

When this all started, my daughter was in gymnastics. Obviously, the gym shut down when everything else did. They could have put business on hold at that time, but they didn’t. They sent out an email giving parents three options to consider. We could continue paying our full monthly payment in exchange for Zoom classes, access to an online video platform, and credit towards other fun options when the gym reopened. We could make a smaller payment for just the Zoom classes and online platform access. Or, we could put our payments on hold until the gym reopened.

Because they took the time to pivot, my daughter is still interacting with her gymnastics friends and coaches and practicing skills during this time. And the gym is still making money.

What if they had assumed that parents wouldn’t be able to afford to pay because of the changes in the economy? What if they just put it all on hold? They might be in the process of going under. They’re in the midst of building a new, larger building while still paying for the building they currently have. They would have been out the money they needed to keep things going.

Instead of making assumptions, they pivoted. And, they’re continuing to do that by surveying all of us parents throughout this time to see what’s working, what’s not, and how we want them to proceed as things reopen.

And, they’re not by any means the only example. Restaurants pivoted to curbside service. Zoos started live streaming to keep children entertained and interested. Companies switched gears to start producing masks and ventilators. SPEARity moved to virtual coaching sessions and started hosting online training to assist businesses. And, there are so many other examples out there.

Do you still feel lost?

We understand that it’s not easy to pivot. None of us have ever navigated a business through a worldwide pandemic. But it’s possible. It’s happening all around us. Businesses are finding a way to survive.

If you’re struggling to see where adjustments can be made and what direction your business should be moving, we have a few things that can help:

If you want to speak with a SPEARity business coach to discuss options for your business, contact us today!