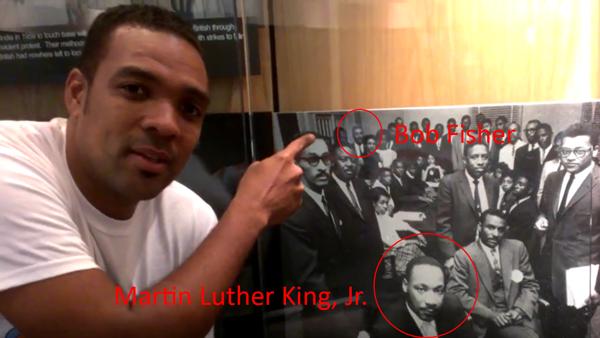 Today is the day, unbeknownst to many, we celebrate Martin Luther King Jr (MLK) for his achievements. Interestingly, there are many who do not observe this day, or even wonder why there’s a need to celebrate. For national government employees, this is a legal holiday that many observe. As the CEO of SPEARity, I’ve decided to close every year in observance of the day which I will explain later. Whether or not you choose to celebrate, as leaders we can learn something from a man who definitely took an uncomfortable stand.

As many of you probably know, MLK is a murdered civil rights leader. In his famous “I Have a Dream” speech, his most often quoted, he said “…I have a dream that my four little children will one day live in a nation where they will not be judged by the color of their skin, but by the content of their character…”

This was not a popular stand to take. As a matter of fact, my father, Robert Fisher, marched with King and other civil rights leaders protesting horrific laws and practices at the time.

Some things have changed. My parents were both teachers because that was one of the most noble professions for blacks at the time. They now have children that are entrepreneurs, principals, surgeons and managers (occupations that were not as available to my parents as they were to their children). Somethings have remained the same. Black home ownership is at one of the lowest points in my lifetime.

At SPEARity, leadership development is based on improving conditions so people can achieve greater success. That’s our ethos. This has never been nor will it ever be the most popular position.

However, we pursue the uncomfortable in pursuit of the greater. In recognition of someone who lived by this principle, we want to thank MLK for moving the needle and creating an environment for me to blog for you.

Are you ready to pursue the uncomfortable? Let’s talk! We are SPEARity, a local Milwaukee leadership coaching firm that specializes in business coaching, executive coaching, and leadership development training.