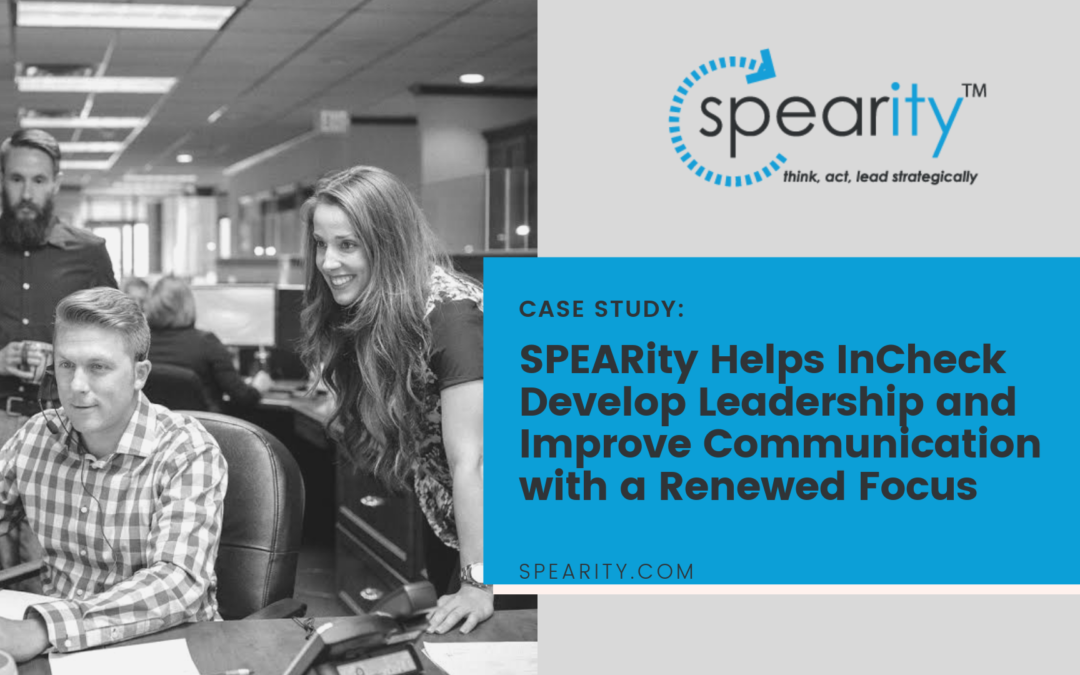 InCheck provides new hire screening services. They offer personalized service to every client with an expert staff working to tailor packages that will solve each client’s needs. They identify the needs of each client and then create a custom solution that fits.

InCheck’s challenges were not unlike that of other companies. Started as a two-person team in 2002, they had grown to a team of 50 in 2017. Through the growth, they failed to make the structural changes to run as a larger organization.

There was a lack of direction

They lacked focus and direction across the board. The executives and management team were so busy reacting to situations that they didn’t have time to be proactive. The company was growing, but with no new sense of goals and direction, they lacked structure. This caused frustration for employees at every level.

Leaders needed to be developed

The management team consisted of strong performers and hard workers, however, the individuals were new in their roles as managers. InCheck did not have the proper resources in place to provide the training that the managers needed. They were suffering from a lack of managerial training and accountability.

Senior managers were experiencing heavy workloads from lack of well-defined roles within the company. They had fallen into the trap that many businesses do of being so busy working in their business that they were not working on their business. They didn’t have a clear direction on where they were going because their energy was focused on trying to keep up with their work.

There was poor communication between departments

Compounding these difficulties was a lack of communication. This affected the company within and across departments. This system created silos that prevented issues from being brought to the table, thus delaying the opportunity to find a solution. With everything coming to a head, morale was beginning to suffer.

The managers and executives at InCheck were ready for a change. They sought to create a new and improved InCheck 2.0, which would bring defined departments, roles, and efficient lines of communication to the organization. They partnered with SPEARity™ to make it happen.

InCheck was determined to make the necessary changes to take their business to the next level. They needed to develop confident leaders across the organization. CEO and co-founder Andy Gallion introduced InCheck to the leadership training provided through SPEARity™. Gallion received business coaching with SPEARity™ founder Darren Fisher one-on-one for several months. He knew the structured approach and “process confidence” he was receiving was the solution that his organization needed.

“Working this way [with Darren] and towards goals, changes your mindset,” said Gallion. “You see stuff that needs to be done, you do it, and it works. You learn to trust yourself more.”

The first step to righting the path was finding the gap where the company was and where they wanted to be. This meant getting the executives to sit down and identify goals starting with the company’s overarching long-term goal. The organization had loose and vague goals in mind, however, they were not specific and there was no way to measure if they were succeeding or failing.

They needed SMART (Specific, Measurable, Attainable, Relevant, Timely) goals that would allow the team members to move forward in one uniform direction. Each person needed a way to know if the work they were doing was moving the company forwards toward their goal or preventing them from achieving success. This SPEARhead™ (the unified goal) was the key to align the organization.

Plans were put in place

With the SPEARhead™ in place, Darren worked with InCheck to create a plan to reach that goal. Through this process, they broke down the long-term goal into manageable steps and began to look for skill gaps that needed to be filled This process is key to the SPEARity™ system. Competencies aligned with strategic habits determine sustained success or continued failure.

With the goal and a plan in place, the executives and Darren began to involve the management team in the SPEAR™ process. The SPEAR™ (SMART Goal, Plan, Execute, Analyze, Realign) process is a strategic system to foster strategic habits, continuous improvement, competency development, and accountability. Rachel Theisen, Director of Operations, was excited to begin working with SPEARity™.

No one knew that Gallion had begun working with Darren months earlier, but she had noticed a change in him that started at that same time. “He was reenergized. You could see lots of growth and a total change. He had a renewed sense of focus within the company.” These changes made her excited to start the process within the company.

Management at InCheck was excited that the company was investing in them not only as employees but individuals, by including them in the training and one-one in the SPEAR™ process. A specific goal from the leaders at the top allowed department managers to see their piece of the puzzle and identify departmental goals that would keep InCheck progressing towards their SPEARhead™.

Each manager was trained on how to track their goals and failures. With stress being placed on realigning—looking at successes and failures to see what worked and what didn’t work, then taking steps to prevent those failures from recurring. The managers were taught that acknowledging failure should not be avoided but should be embraced. This became an integral part of their regular schedule to see what changes needed to be made to continue moving forward with their individual and departmental goals.

The SPEARity™ app was used

All executives and managers began using the SPEARity™ app to track their departmental goals and successes or failures in their activities working towards those goals. Through regularly scheduled meetings, the team stays connected and realigns as needed to continue the forward process.

“SPEARity™ helped us create a culture of success through our daily accomplishments,” said Andy Gallion.

The company began working smarter. They created and defined an organizational chart that did not exist prior to this process. This created opportunities for staff and allowed necessary changes to be made in departmental roles for the company to run more efficiently. The process also allowed several underlying and unspoken issues to arise and led to necessary staffing changes.

As InCheck continued working with SPEARity™, the managers transformed into leaders. The executives learned how to work collaboratively with the managers and provide them the support and resources that they needed to achieve their goals. The process empowered the managers to work towards the company goals. Everyone began working on the same page.

Every leaders noticed an improvement in the communication within the organization. Tom Hunter, Director of Sales & Marketing noticed that “Interdepartmentally communication has changed. Managers are talking more and situations that need to be resolved are coming to the table faster.”

Meetings have become more productive. While the change was uncomfortable at first, managerial meetings are now full of candor as the managers work together to solve issues and come up with ideas to achieve goals. The managers are able to utilize each other as resources.

A culture of success was born within the company. The cultural shift is the mission of SPEARity™, to develop a culture of strategic leaders. As managers began to recognize and acknowledge their success and failure, true confidence began to grow within the individuals and the company. The focus has turned towards specific goals with plans built to reach them. The SPEARity™ app helps keep these goals in focus and accountable.

“The goal tracking software helps us learn from success and failure, and fosters accountability. We now know where we are as an organization and agree on where we would like to be. It has brought a new sense of confidence and initiative among our employees.” said Julie Steffel, HR Generalist.

InCheck is continuing to work with Darren to align their company on a path to reach their future goals. Through regular meetings and training, they are continuing to invest into their managerial employees through leadership training.

After proper training, the managerial staff is using the SPEARity™ app several minutes a day to prioritize their tasks and track their progress towards their goal. The little bit of time they are spending on the app is saving some of the staff “hours each week in being more productive”.

On a deeper level, the team members have achieved a new level of confidence and a revitalized energy and focus towards the future. The skills they have learned have changed them personally as well as professionally. Andy Gallion found, “Darren makes it clear—he is on your team and you will win. He’s your biggest supporter. You have to be honest with yourself and ready to change. We went all in and listened to it all with open minds.”

Are you ready to transform your business?

Are you ready for your business to

Imagine what the SPEARity™ process could do for your business. What would your team be capable of achieving?